I designed the Projection Pavilion as the central element of my exhibition Ciudad Moderna at Laboratorio Arte Alameda in 2005. This temporary pavilion measured 20 x 6 x 2.8 metres and was built of wood, drywall, concrete block, paint, and a digital photo-mural. Two lounge areas were delineated by carpets and furniture. The pavilion was designed to seemingly penetrate the wall separating the two main exhibition spaces of the site’s sixteenth century former convent. Curator: Priamo Lozada. Builder: Fernando Flores Reyes

I moved to Mexico City in 1994. I came for the architecture, a different form of Modernism than I had seen in North America or Europe. Informally known as “tropical Modernism” it features brise-soleils, the uninhibited use of colour, and the integration of mosaics, frescos and sculptures. My fascination with this architecture launched the years of research that led to the creation of the two pavilions in this book.

The Projection Pavilion shows the early, planar work of Mies van der Rohe submerged in a tropical-Modernist acid bath. It is an homage—in temporary, cheap materials—to the Mexican architects who dared to tropicalize the vocabulary of Mies. Enrique del Moral and Luis Barragán were both influenced by the early, pure architecture of Mies: the 1924 Brick Country House project, and of course the 1929 German Pavilion at Barcelona. It is easy to trace the line of influence from the long, extrapolated slabs and “outdoor rooms” of the German Pavilion to the house designs of del Moral and Barragán. And it’s a pleasure to see Mies’ slabs processed by Mexico, coated with colour or perforated with holes to allow the breeze to pass through. One of the first things that struck me about Mexico when I arrived in 1994 is the country’s ability to digest extremely diverse cultural phenomena, whether Hollywood cinema, psychoanalysis, or foreign architecture, and synthesize a uniquely Mexican product. I think del Moral and Barragáns’ reading of Mies exhibits this ability. 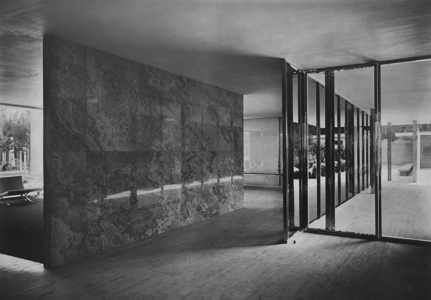 This piece is also a metaphorical self-portrait, a reenactment of my own German and Canadian artistic background processed by a Mexican cultural education. For the architecture I’ve seen and the artists I’ve met in Mexico have altered my creative process in both profound and subtle ways. Just as the architecture of Mies was absorbed and altered, I was happy to find my own work absorbed and transformed. Perhaps I was even tropicalized.

The Projection Pavilion consisted of a series of simple, formal quotations of Mies’ German Pavilion, as if three or four pieces had been sliced off the original structure and reassembled into a new composition. The German Pavilion at Barcelona was composed of huge sheets of marble, onyx and glass—all rare and costly materials for their time—and stood for just nine months. The Projection Pavilion stood for five months and was planned according to an economy of means fitting to the twenty-first century. It was made of cheap, widely available materials such as drywall, plywood and concrete block. Yet a few of the familiar Miesian spatial relationships were present: the long, non-supporting, radiating walls, the loosely defined enclosures.

One of those walls supported a composite photomural, made up of beautiful architectural photographs: a “greatest hits” of Mexican Modernism copied from period international architectural publications I have been collecting on my travels throughout the world. Architecture d’Aujourd’hui, Progressive Architecture, Lotus; these are the apparatuses of dissemination that introduced the Mexican movement to the rest of the world and alternately brought Mies to the Mexicans. A second wall was built as a brise-soleil, a third was painted a bright “Barragán red”, and a fourth acted as a screen for a video projection. The video, titled Ciudad Moderna, is a 1960s Mexican comedy remixed to form a document of the contemporary city. It shows a city full of brise-soleils, bright colours and wall-scaled artworks.